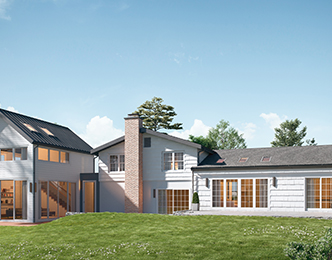 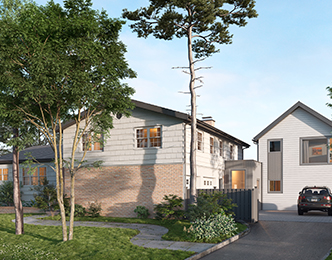 MSA was asked to create an addition to this existing split-level home. The 1,100 sq. ft. addition is composed of a family room on the lower level while the second floor was designed to include an additional bedroom and bathroom. Located in Rye, New York, the existing home’s east side faces the Rye Nature Center. This project was designed to respect the character of the existing home and site while taking advantage of the views toward the Nature Center. The addition branches off the existing home with a one-story annex hall. The space then opens up to the two-story addition with large floor-to-ceiling windows toward the Nature Center. The form itself is punctured with large, operable windows and skylights, creating a dialogue between the interior and exterior. In order to unite the existing home, addition and site together, new landscaping and an exterior terrace draw the user outside. From the front façade of the home, the existing is reclad to match the addition, juxtaposing horizontal and vertical siding, overall tying together these two forms.